UPDATE: This post was originally written in October of 2019. It's being posted almost a year later, but computer and PC hardware prices have actually increased significantly since then. At the start of the pandemic everything skyrocketed and prices are still recovering to where they were around a year ago.

The time had finally come to build Brendan his first “new” computer in almost 7 years. Let's start with what he's coming from:

In 2013, Brendan bought a PC from CyberPower or one of those similar resellers with an AMD FX-4300 processor and an ATI Radeon R7 270X Graphics Card. It worked well until May of 2017, when an accidental spill killed the graphics card. He replaced the card with an Nvidia GTX 1060 but it was all downhill from there and the processor kicked the bucket in September of that year.

To rejuvenate the system, I sent him a motherboard with an i7-2600 processor, which was actually a significant upgrade to the FX-4300. The i7 paired with the 1060 was a pretty respectable system that worked well for another 2 years and played pretty much anything he threw at it. Some intermittent hardware issues started cropping up and finally the machine refused to turn on. Instead of investing a ton of time on reviving it he decided it was time for an upgrade.

Planning out a Gaming PC on a budget

That led to the following purchasing and build in September of 2019. Our two goals were to build a great bang-for-the-buck computer as well as have some good upgrade pathways down the line. For that reason, I've decided to go with a Ryzen 2nd generation processor and a B450 motherboard. We planned to go with the Ryzen processor because the price-to-performance ratio is a lot higher than the last few generations of Intel options and the B450 motherboard because with a firmware update most (if not all) of these motherboards add support for 3rd Generation Ryzen processors, which, once the price drops in a year or two will be a solid upgrade along with a new graphics card. 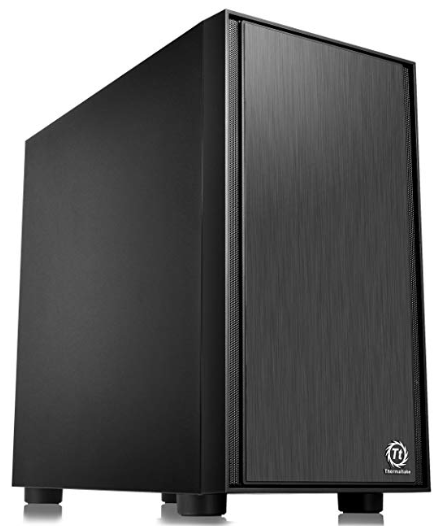 For a few weeks I was watching for deals and price fluctuations. All-in-all, everything indicated it was a great time to buy Ryzen 2nd Generation processors, particularly the Ryzen 5 2600 as well as B450 motherboards. So I bided my time waiting for a good deal to come along, checking Amazon Warehouse Deals (used/returned items) everyday. Eventually I was able to pickup a GIGABYTE B450M DS3H motherboard for around $60. Finally, a rare opportunity presented itself when a Ryzen 2600 came on the Warehouse Deals market for $110. When it arrived it was a little damaged with a few processor pins bent as well as a dirty heatsink. I called Amazon before I even tested it to see what they would do and the offered to take an additional 25% off the price. I then cleaned the heatsink, carefully bent back the pins, and booted it up and everything worked fine. Both parts together cost around $150 versus their retail sum of around $300.

I filled out the build with a relatively classy looking (for the price) Thermaltake case, 8 GB of ram, an NVMe SSD, and a budget (but still Gold-rated) power supply.

Everything came out to around $360 as we were reusing Brendan's existing Nvidia GTX 1060. When the time finally comes we’ll easily be able to upgrade it to a 3rd Generation Ryzen processor and contemporary Graphics Card

By MrBigglezworth at October 01, 2020 No comments:
Email ThisBlogThis!Share to TwitterShare to FacebookShare to Pinterest
Newer Posts Older Posts Home
Subscribe to: Posts (Atom)