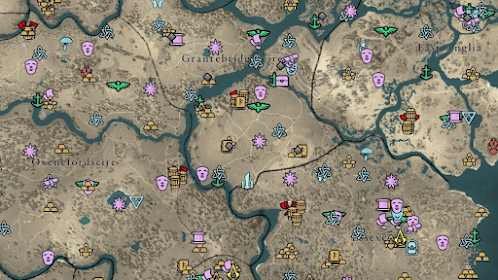 Why can't I ever finish an Assassins' Creed game? I have played Assassin's Creed I, II, III IV, Odyssey, and now Valhalla. I play a lot of games and a lot of different games. I played almost 30 games in 2019 and even more in 2020. I finish about 75% of the games that I start. After starting a new game, I can always tell if I am going to finish it within the first hour. It's a simple matter of if I like that gameplay style, the presentation, and sometimes the story. Every time I play an Assassins' game I stop after around fifteen hours - almost on the dot. There's also a point at about the five hour mark that I think to myself "this is a lot of fun... I think I am going to finally finish one of these." The game play is uncomplicated but satisfying and the story is  the same. By the time I get five hours into a game if I have the "this is fun" thought I almost always finish it. So what makes the Assassin's Creed so unfinishable for me?

The obvious answer is repetition. Most Assassins' games show every trick in the book in the first three to four hours and the next thirty hours is the same combat and the same instances in slightly different locations. But that can be said for so many games. It didn't stop me from playing Skyrim for 400 hours or WOW for more hours than I would like to think about.

So after thinking long and hard the answer is this: Assassins' Creed is just a list. The game presents its progress and its maps and everything else in a list format. There's no sense of exploration, no chance I might see something that will really blow me away. It's just the Ubisoft model - take over the tower - great - take over the town - great- take over the castle - great - here's three new areas with towns/towers/castles. But, whereas in FarCry, I might ride a bear into a camp with a bazooka, there's no such fun to be had in Assassins' Creed. It's just go here kill this, use the exact same tactic and weapons - rinse repeat.  If I ever finish a mission in a game and am dreading the next mission - its time to move on.  The newer Assassins' games don't even really have the twist of interesting  assassinations anymore. They are just bland RPGs with beautiful backdrops.

Video games at their best push and challenge you while presenting art that is both seen and experienced. At their worst they are a positive feed back loop that gives you box checking dopamine that should be reserved for finishing your taxes.