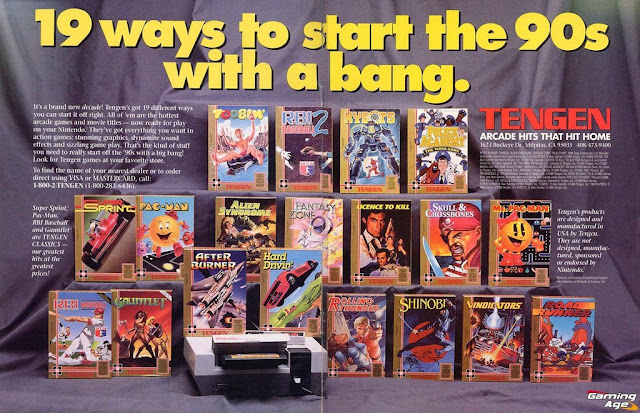 Like so many of my contemporaries, I have a deep nostalgia for the 90s. Maybe it was a simpler time or maybe it is just my fond childhood memories. So many of these memories take place in my basement, playing my older siblings’ games on our old wood paneled CRT television. The 90s were a pivotal period for video games: the shift from 2D to3D, the rise of SONY as a gaming juggernaut, the fall of SEGA, and leaps in computer technology all contribute to the 90s being the most important decade in video game history. This will be the first of a three part series exploring video games in the 90s. Let's go through a journey of the 1990s together.


We start at the end—the end of the third-generation of video game consoles. The Super Nintendo (a.k.a. the Super Family Console or Famicon in Japan) launched in Japan in 1990, but did not arrive in North America until the following year.


1990 saw some of the best and most refined titles of the third generation on the Nintendo Entertainment System, the Sega Genesis, and of course personal computers.


Nintendo launched Super Mario Bros 3 in 1990, which sold almost 18 million copies and is considered by many to be the height of 8-bit platforming. A few months later, Square Software released Final Fantasy, a title that would start one of the most important and popular RPG franchises of all time. Final Fantasy is still around today—Final Fantacy 15 came out in 2016, and more games are planned. Capcom also released Mega Man 3 in 1990, which introduced sliding and faster paced combat to the Mega Man series.


1990 was also a big year for P.C. gaming. Secrets of Monkey Island and Kings Quest 5 took the point and click adventure genre to new heights, while Wing Commander and Roller-Coaster Tycoon kicked of the simulation/management genre.


Whereas 1990 was a strong and steady transitionary year, 1991 was an explosive year of genre creating and defying change.


On June 23, 1991, Sonic the Hedgehog released in North America. Even those who don't play games or have any interest in video games know who Sonic is. Sonic went on to become SEGA's mascot and reached such a high popularity in the mid-90s, that he was able to compete with Mario and help the SEGA Genesis to compete with the Super Nintendo. I was never able to beat Sonic as a kid, one time I got so scared when Sonic was drowning in the water that I  ran upstairs, but slipped on the last step and bruised my knee.


Just two month later, the Super Nintendo (Super Nintendo Entertainment System) launched in North America. Its two biggest launch titles were Super Mario World and F-Zero. Super Mario World is generally still considered to be the best 2-D platformer of all time. That same year, The Legend of Zelda: A Link to the Past was released for the Super Nintendo. Game Informer Magazine recently went through the 300 greatest video games of all time and ranked A Link to the Past as the greatest and most influential video game ever made.


The year would finish out with Sid Myer's Civilization. Civilization had you guide a society from hunters and gathers in 4000 BCE all the way to the modern era. A simulation game of this scope was revolutionary and the focus on slow and thoughtful decision over a long period of timehelped make Civilization a best seller.


1992 was more of a slow, building year, and started off on an unfortunate note. On January 1, 1992, Atari stopped supporting its various platforms.  A few months later, Activison, the first ever third party developer who made many Atari games, filed for Chapter 11 Bankruptcy  (Activision survived and is still around today).


1992 was a good year for the Gameboy.  Kirby Dream Land, the first ever Kirby title, and Mario the Six Golden Coins released. My brother had both of these games on in Gameboy. I remember thinking that being able to play Mario on a road-trip was the absolute height of technological achievement.


Probably the most important titles that was released in 1992 was Castle Wolfenstein by Id Software. Wolfenstein is credited with creating the first person shooter genre and put Id Software on the map.


Mortal Kombat was also released in 1992. Mortal Kombat was a fighting game that featured blood and gore. Notably, the game featured "fatalities." After you defeated an opponent, you could kill them in a vicious manner (for example, if so inclined, you could rip your opponent’s skull and spine out of his body, splitting him in half vertically) by hitting the correct sequence of moves and attacks. This created an outrage among various groups and lead to the creation of the ESRB (which I will discuss further in a future post).

That's it for the first three years. Let me know if their are any classics from the early 90s that you have serious nostalgia for!