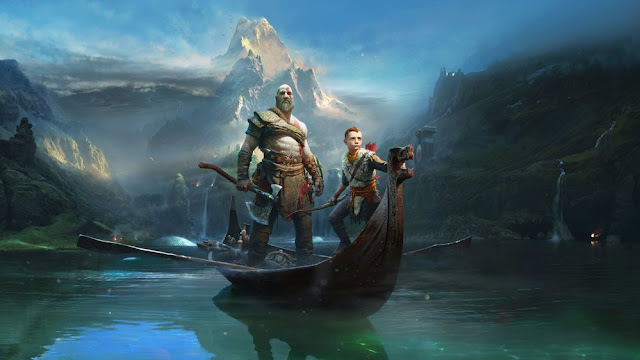 The original God of War trilogy was a best seller on the PS2 and PS3. The game features Kratos, the half son of Zeus on a revenge quest against the gods of Olympus. In his quest to kill his own father Kratos murders hundreds if not thousands of innocents and shows no compassion or forgiveness for anyone he crosses.

God of War (2018) shows how much gaming as a genre has evolved over the last decade. Gone is the Kratos who was filled with ceaseless, often unjustified rage who kills and destroys indiscriminately in his quest for vengeance. Kratos is still angry, but it often boils below the surface as he tries to set an example for his son, Atreus, who is your companion throughout the game. Kratos struggles as he attempts to be a patient  and supportive father. This attempt at being restrained makes the moments when Kratos lets his rage loose feel so much more impactful.
God of War takes place in the realm of Norse mythology. The game opens with Kratos chopping down a tree to build his wife's funeral pyre. His wife's dying request was that her ashes be spread atop the tallest mountain in the land. Early on it’s made clear that this will be no easy task, as the world is dangerous and the Norse gods have taken notice of Kratos and want him dead. The overall plot is compelling and interesting with great twists and turns. There were solemn and reflective moments and big bombastic set pieces that created an overall well-paced and satisfying story that takes around twenty hours to complete. There are also some extremely tense and draw dropping cinematic moments.

Both Kratos and Atreus have substantial character arcs. Watching the characters grow as their relationship grows makes the journey they are on even more compelling. The side characters that populate the world are well written and have believable faults and motivations. The overall writing and voice acting is very strong and helps to make the characters come to life.
There's also a large amount of side content with side quests, hidden collectibles, and some late game hidden boss battles that will really push your skills. These help to flesh out the world and give you reasons to re-explore areas after having gained new abilities. This is good because the world of God of War is beautiful and interesting, with locations ranging from a dead giant the size of a mountain range to a sub-terrain vault filled with traps and treasure.
The combat is fantastic. Kratos wields a large ax, called the leviathan, that is imbued with frost powers (shooting frost beams, freezing enemies on contact, etc.) The ax is an absolute joy to use--it feels powerful and making contact with enemies is satisfying. The ax can also be thrown and recalled like Thor's hammer, Mjölnir. Kratos can also fight with an Athenian shield and his bare hands. Combat opens up as the game goes along giving you more variety and options. The depth of combat grows as your proficiency does which creates an organic rise in your capability to deal with the game's challenges as they ramp up in difficulty.
Although there is a healthy variety of enemies, I was a little disappointed with the lack of variety in boss battles. There is one mini-boss in particular that gets reused far too many times. All told, there are only four unique bosses in the whole game. One of the bosses, who serves as the games main antagonist, provides one of the most entertaining and interesting boss battles I've ever experienced.
One other minor complaint that I had with God of War is that some of the puzzles felt like busy work. Overall most of the puzzles offered the right blend of challenge and approachability. But many of the optional puzzles (that you can complete for helpful items) have you finding and destroying three runes (Nordic symbols). Finding where these runes are hidden was often a little frustrating and felt like the only purpose that was being served was padding out the game.
I would highly recommend this game to anyone who owns a PS4. My final scoring of the game is a 9.5 out of 10. The only real misstep in the title is a lack of boss variety and some bad puzzle design, although the offending puzzles were not mandatory, everything else is stellar.
By tdpgamer at October 22, 2019
Email ThisBlogThis!Share to TwitterShare to FacebookShare to Pinterest