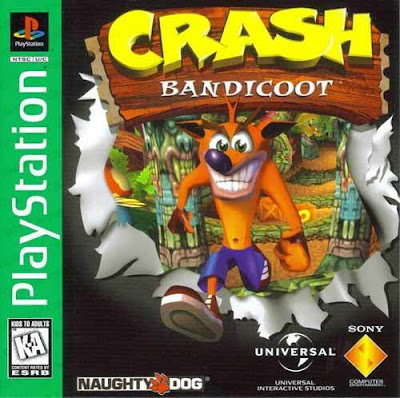 1996 was a huge video game year for me. The Nintendo 64 released and it featured four titles that made it into the top 30 of my top 50 list (now top 51 since I updated it). Crash Bandicoot, Super Mario 64, Pokemon Red (and Blue for losers), and Mario Kart. In the long run Mario 64 was the most important title from 1996, as it became the template and gold standard for all 3D games of the generation, but I am going to be discussing Crash Bandicoot. I recently purchased the Crash Bandicoot N'Sane Trilogy, which is a careful recreation of the Crash Bandicoot trilogy in HD. So far I have beaten the original Crash so here is my retro review:

Crash Bandicoot- I want to start by saying  wow this game was hard. I gave up trying to 100% every level around half way through because it was driving me a little crazy. That being said I loved it. The challenge felt fun and fair. The levels are unique  and varied and are short enough that even if it took me 20 tries to beat a level that would only amount to about half an hour. I have read some other reviews that said Crash hasn't aged very well and that the ultra precision required in some of the platforming is unfair. I really felt that Crash has aged  well. I enjoyed the challenge and felt it was difficult, but fair, and rewarding. There were very few instances where I died and I felt it wasn't my fault and even fewer instances where I didn't want to jump back in and give the level another shot after a game over screen. The simple layout with a single path filled with challenges was refreshing. What is also great about Crash is the secrets and collectibles. Hidden bonus levels and a 100% reward for getting every box in a stage adds an obtainable extra challenges for those who want to get more out of the game. All in all I was almost surprised at how much fun I had revisiting the SONY mascot.

1997 had some heavy hitting titles, Golden Eye, Final Fantasy 7, Starfox 64, Grand Theft Auto, and Gran Tarismo. Golden Eye stands out to me because it was my first experience with a competitive split-screen first person shooter, which would become a staple activity with friends from middle school through college. Final Fantasy 7 was a landmark title for graphics and story telling, and actually has a remake in the works right now. I remember watching my older brother and his friends playing Final Fantasy 7 and being blown away by the graphics and presentation.

I feel like I have said almost every year was a big year or an important year as I have gone through the 90s, and that is because it’s true. 1998 however, is different. 1998 was the biggest year of the decade and maybe the biggest and best year for game releases ever. Let me list all the titles, then we can unpack why this year was so important I want you to picture me reading the next three paragraphs in one breath.

Although, I don't personally care for Ocarina of Time, the first 3D Zelda title is held near and dear by millions and you can often see atop best games of all time lists. (I was once talking with a friend from law school who apologized that it was only his second favorite game of all time saying he knew it was sacrilegious to not have it number one). Banjo-Kazooie represents the high water mark for the collect-a-thon genre that was huge in the late 90s, Grim Fando is widely considered the best point and click adventure game of all time, Starcraft is widely considered to be the best RTS game of all time (second maybe to Starcraft 2). Metal Gear Solid redefined the stealth genre as well as narrative structure and player interaction in video games. For example, there was a boss fight in Metal Gear Solid where the boss read games from your memory card stating he was reading your mind and to beat the boss you had to take unplug the controller and plug it back in the player 2 slot.

Delta Force was the first online shooter game that I ever played. I could go on saying why each game I mentioned was critically important and successful. And I will, Star Wars: Rouge Squadron kicked so much ass, you flew space fighters from Star Wars with a huge variety of ships and missions. Watching Paul play Resident Evil 2 gave me nightmares for years, also people really love it, so much so that its being remade in HD this year. Sonic Adventure was the first true 3D Sonic Game. Soul Caliber launched a fighting series based around sword combat that is still around today, Soul Caliber 6 is coming out this October. I've never played Boulder's Gate, but it sold over 2 million units and reinvigorated the classic DnD based computer role playing game. I think that's all of them.... Oh wait I forgot that little title, Spyro the Dragon. Spyro became almost as popular as Crash and the first game alone sold over 4 million copies. Spyro eventually spawned ten squeals and a remastering of the original trilogy is currently in development. Also, I had a deal with my mom that if I read 10 books over the summer she would buy me one video game at the end of the summer, and I got Spyro and loved it.

That's it for now, tune in next week for the finale and an update on the state of the blog.
By tdpgamer at October 22, 2019
Email ThisBlogThis!Share to TwitterShare to FacebookShare to Pinterest