On The Razor’s Edge of Difficulty: Sekiro: Shadows Die Twice 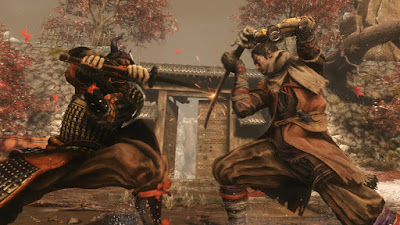 The relationship that video games have with pacing and challenge is somewhat unique among mediums of entertainment. A book or movie may be challenging to get through, but there will never be anything that is physically stopping you from continuing. There are no boss battles in movies. There are many games (particularly from the late 80s and early 90s) that are nearly impossible for even the most seasoned gamer to beat.

When I was younger, I rarely finished a video game. This is partially because I was an unexperienced kid and partially because video games were more difficult. This created a strange expectation; no matter how much a I loved a certain game, I didn’t expect to see the end of it. I have never had this expectation with a book or a movie, if I enjoy a book or a film, I finish it. Frequently while playing a game I would reach a particularly challenging section and I would get stuck. This could be an obtuse puzzle or something that pushed my reflexes further than they could go at the time.

Now, I rarely have trouble beating most games. I actually seek out more difficult games because I find the challenge creates a more rewarding experience. I recently played through a game that brought back the feelings I had as a kid.

Sekiro: Shadows Die Twice. This is the newest title from the Japanese developer From Software. This company makes the Dark Souls series (my favorite series of all time) and is famed for their brutally difficult games.

There was a lot of buzz on the internet about Sekiro after it’s release. Some people were very upset. This game was supposedly harder than any previous From Software game. There are a lot of posts on reddit about people who had paid $60 for the game only to get completely stuck 20 mins into the game.

I thought this wouldn't happen to me because I have played hundreds of hours of Dark Souls and I felt very prepared.  I was wrong. The first true mini boss (about 20-30 mins into the game) crushed me in into the ground about 50-60 times. It took me hours to get past this early boss and there were multiple times in Sekiro that I wanted to stop playing because of the difficulty. Eventually I got through it, but if I’m being honest, I didn’t enjoy it. The game frequently went over the edge of difficulty into the realm of pure frustration. There was some feelings of satisfaction in progressing, but it was more of a "finally" feeling rather than a "hell yeah I did it" feeling.

The world in Sekiro is fascinating, beautiful and sometime terrifying. Its a fever dream of feudal Japan. The experience of exploring endless castles and corrupted temples is heightened by the consent threats that lurk within. So when a massive bull with flaming horns is keeping you from progressing it can be downright anxiety inducing.

All that being said, I’m glad Sekiro exists and I wouldn't want it to be an easier. Games are much less challenging and more accessible and I love that, but I still appreciate games that remind us the price of admission alone does not guarantee the full experience. This is on full display in games that are set up to challenge the player and force you to grow in skill and depth of understanding to progress.