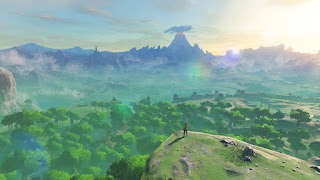 I played a lot of different games in 2018. Here are my thoughts on those games:

Breath of the Wild: This was by far my favorite game of last year. I have never been a fan of the Zelda series but this title blew me away. I appreciated the free formed nature of exploration. The game gives you very little direction and encourages you to climb up high, look for something and head in that direction. The dungeons are much smaller than in previous Zelda games, which I liked because it meant the solution to any puzzle you are tackling is in the room with you. Also considering the game is running on the fairly limited hardware of the Switch it looks beautiful.

Mario Odyssey: I had a lot of fun with odyssey, but in some ways it was disappointing. It didn’t nail the exploration elements for me and there was no real challenge until the end game. Then it felt like the difficulty ramped up to the point of frustration. That being said odyssey is packed full of charm, controls really well, and I had a fun time with it.

Total War Warhammer 2: More of the same. Very similar to the first Warhammer. It uses the classic Total War formula (control a large empire with turn based strategy- engage in battles with real time strategy). Build your empire on a huge fantasy map and fight in small and large scale battles. I loved the mix of classic strategy and high fantasy.

God of War: My number two, not much more to say on this one, check out my full review already on the blog. Really shows how videos games, as an industry, have grown in the last decade.

Horizon Zero Dawn: One of the best executed stories I have ever experienced in a game.  There is an Interesting and mysterious word to explore, fun combat, and good dialogue/ character development. Rarely do you find a mystery like the one here that has such a satisfying conclusion in any genre.

Monster Hunter World: I have tried to play previous monster hunter games on three or four occasions and it didn’t stick. This one finally clicked. I got in the rhythm of killing monsters and upgrading my gear to kill bigger monsters. This title features many quality of life improvements that make it much less daunting than previous titles in the series.

Crash Bandicoot remastered: Holds up better than I thought it would. I really enjoy the straight forward challenge. There are some crazy spikes in difficulty that can be frustrating, but not impossible.
Bayonetta: I didn’t like it. The combat didn’t age well and I wasn't into the story.

Mario kart 8 Deluxe: Mario kart is fun, switch is portable, what else do you need?

Red Dead Redemption 2: Takes a while to get into it but one you do it’s fun game that is well written, beautiful, and takes it time. The game can be really slow, but if you let yourself get wrapped up in it you'll find an amazing experience.

SNES Classic Console: Why did I buy this if I already own most of these games? System looks cute. So far I re-beat Super Castlevania and played a bit of almost every game on it. Nice package with 21 great games.

Dead Cells: A rougelike is a subgenre of game where when you die you start all over from the beginning, only you keep some limited items you collected. Dead Cells is a rougelike with tight controls, a pretty art design, and procedurally generated levels. (See https://en.wikipedia.org/wiki/Roguelike). The game can be really challenging, but it great for the Switch because each run is only around 20 mins.

Stardew Valley: I am normally not into farming sims, but I really adored this game. The map is well thought out and fun to explore there are interesting people to meet and different ways to play. You can farm, fish, mine, or fight monsters. The art style and music is also very relaxing and charming.

Smash Ultimate: It’s all the previous smash games combined into one. There are over one hundred maps, tons of items, content, music, and playable characters. If you love smash you’ll love this. You’ll need to get a real controller though.

Celeste: This was my biggest surprise this year. It’s a very very difficult platformer that centers on dealing with depression and anxiety. It’s hard to pin down what makes it so special, but you really shouldn't miss this one.
By tdpgamer at October 22, 2019
Email ThisBlogThis!Share to TwitterShare to FacebookShare to Pinterest